The Swiss Army knife is a pocket knife or multi-tool manufactured by Victorinox. The Swiss Army knife generally has a main spearpoint blade, as well as various tools, such as screwdrivers, a can opener, and many others. The handle of the knife usually depicted in its traditional red color, other colors, textures and shapes since 2006.

Victorinox models are available in 58mm, 74mm, 84mm, 91mm, 93mm, 100mm, 108mm and 111 mm lengths when closed. The thickness of the knives varies depending on the number of tool layers included. The most variety tool configuration of the Victorinox model line is up to 15 layers. On this article were going to talk about the small standard size of 58mm. Let us see two of the small Victorinox small pocket knives which are the Classic and the Rambler. 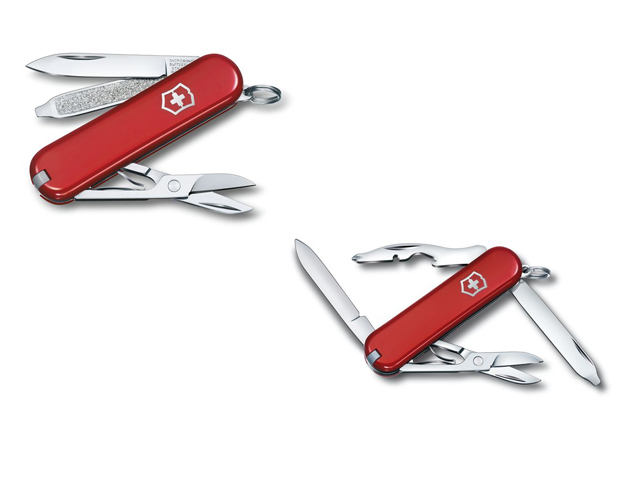 Victorinox Classic SD
The Victorinox Classic SD is a small but functional tool with the standard 58 mm model. The SD in the name implies that there is a small slot head Screwdriver at the tip of the nail file. The Classic SD does not attract attention; it is thin and light enough that it is barely noticeable when carried. This tool will easily fit right in if you only have room to carry a set of keys in your pocket.

The Classic SD is available in dozens of different colors and pattern, including translucent and glow in the dark. The patterns include zebra prints, flowers, chocolate, Swiss cheese, jelly bean, baseball, football, sushi and lots more. The patterned versions have a coating to increase durability. See also: Victorinox Fibrox Pro vs Rosewood.

There are a total of seven functions for this knife. The first one is the blade; it is slim and short with a drop point tip. The knife is non-locking type and intended for light task only. Moving on to the scissor, it is small and good for cutting small things. It is useful for cutting tape, opening food packages or snipping loose threads on clothes. 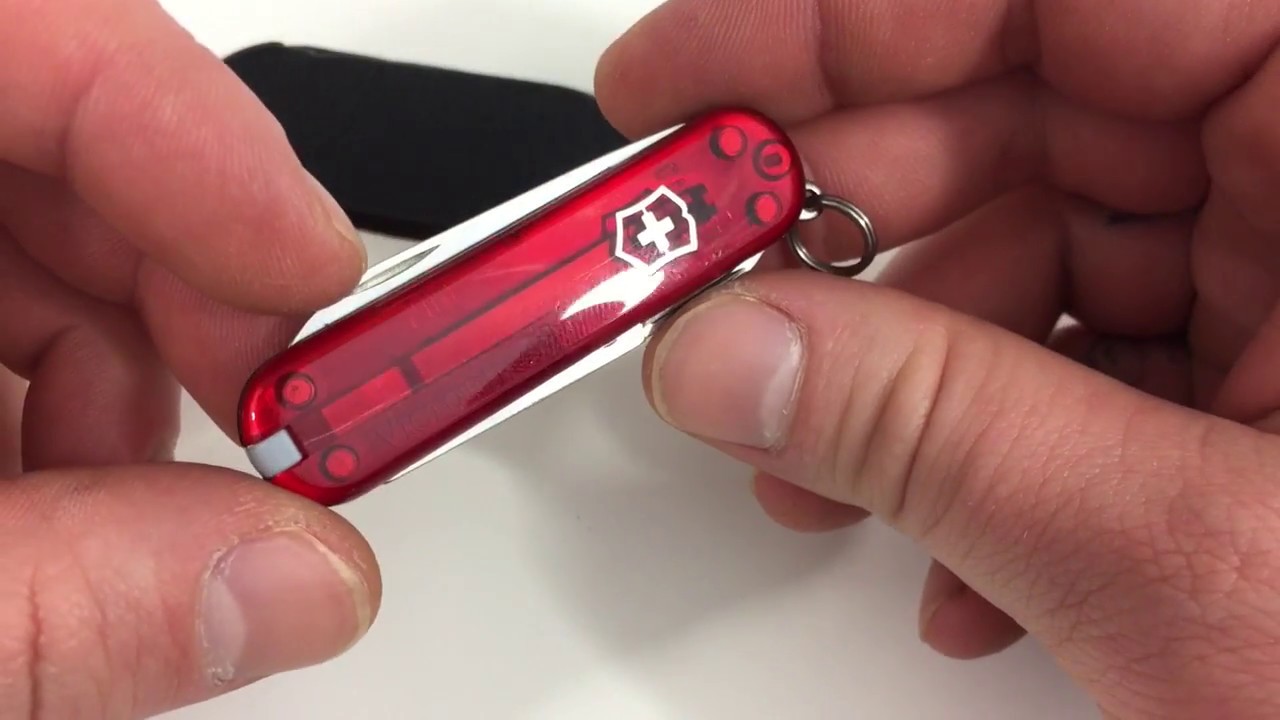 As mentioned before the nail file with screwdriver is the next feature, the screwdriver tip is a great addition for working with small screws. The nail file is used for fixing minor nail cracks also doubles as scraper. Toothpicks and tweezers are also very handy to have in this small tool. Tweezers are very useful for pulling stray hair, splinters and picking small stuff.

The Classic SD also comes in many variations. There is the ALOX classic which removes the toothpick and tweezers but offers metal scale. Around 2015/2016 the Classic was available with a push pin tool instead of the nail file, at least two versions of the push pin tool exist.

A couple of different logos can also be found on this knife such as; Victorinox logo, Star of David, Shamrock, and the 125th Anniversary logo. The last two variations are the Gold Bar Classics and the 2012+ Crowdstorm Annual Limited Editions.

Victorinox Rambler
The Rambler is an upgraded version of the Classic SD. Along with the seven functions that the Classic has to offer, the Rambler has an additional offer of a wire-stripper, bottle-opener, and magnetic Phillips driver. Altogether the Rambler packs 11 functions into the space of the standard 58mm model. Unlike the Classic that comes in different colors and patterns, the Rambler only available in red.

The main blade of the Rambler is sharp and the scissors are hefty enough to cut through a length of paracord. The nail file and flathead sit next door, with the grinding surface facing outward. For those who used to the Classic’s inward-facing layout needs to take a bit of adjustment to the layout of the Rambler.

The additional wire-stripper, bottle-opener, and Phillips driver lies on the blade-side. The Phillips will flawlessly turn and capture the smaller screws found on most sunglasses or electronics. The other two functions is the toothpick and tweezers much likely have the same use like in any other Swiss Army knife.

There are also variations on the Rambler. The Emergency Rambler has an “Emergency Blade” instead of the standard pen-blade. The Pharmaceutical Rambler substitutes the emergency blade for the pen blade and a cut & picker tool for the nail file.

Conclusion
The ever-increasing number of people that have become interested in prepping or at least watching shows where other people talk about prepping, EDC is become widely known. This acronym EDC stands for Every Day Carry; it is used to describe tool/weapon that you carry on every day. The Swiss Army knives fit in well with this EDC among other brands that is available.

For both of these pocket knives there is also the aluminum version or “Alox” available to be bought instead of having the plastic handles. This kind of knife is an ideal for people who do not consider themselves as a ‘tool’ person but know the benefit of good quality tool available.

For warranty the Victorinox guarantees all knives and tools to be first class stainless steel and also guarantees a lifetime against any defects in material and workmanship. Damage caused by normal wear and tear, misuse or abuse are not covered by this guarantee.

In this case, the Classic SD is the winner. In its size with all the function that is helpful, it is worth the price. Since the additional 3 functions on the Rambler sometimes is a bit tricky to use. The 7 main functions are enough for an EDC. With its price it is also a great gift for anyone even a starter knife user.

sharpmost.com is a participant in the Amazon Services LLC Associates Program, an affiliate advertising program designed to provide a means for sites to earn advertising fees by advertising and linking to sharpmost.com (amazon.com, amazonsupply.com, or myhabit.com).

CERTAIN CONTENT THAT APPEARS IN THIS SITE COMES FROM AMAZON SERVICES LLC. THIS CONTENT IS PROVIDED “AS IS” AND IS SUBJECT TO CHANGE OR REMOVAL AT ANY TIME.